LAND PREPARATION
Mould board (MB) plough: It is primary tillage equipment which turn the soil, cuts trashes and buries them inside the soil. It is also used for turning and mixing green manure crops/compost/farmyard manure, lime and other soil amendments into the soil. 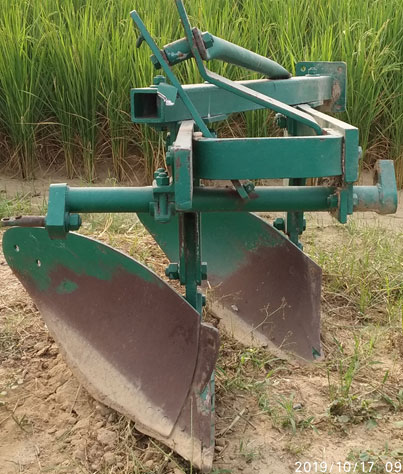 Disc plough: Disc plough is also a primary tillage implement which is used in stony, hard and dry, trashy soils and in soil where scouring is a major problem. 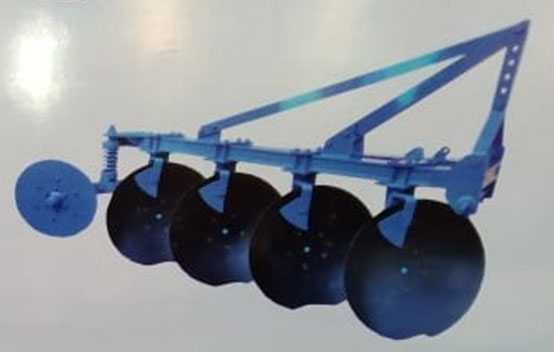 Tyne type cultivator: Cultivator is secondary tillage implement used for preparation of seedbed. It is also used for intercultural operation/weeding in wider row crops like maize after adjusting tynes spacing . 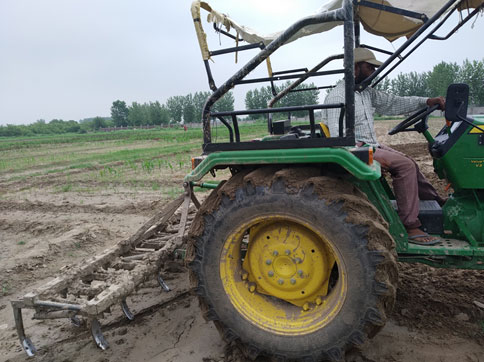 Rotavator: Rotavator carries out secondary tillage operations such as harrowing and leveling in single operation. It destroys weeds, incorporates manures/fertilizers and left-over stubble of previous crop, brake down larger clods and pulverizes the soil. It prepares seed bed in one pass thus saves draft power, time, labour and cost as compared to conventional tillage. Rotavator can play an important role in intensively cultivated regions where window period for seed bed preparation is very narrow. Continuous use of rotavator may create subsoil compaction just beneath the operational depth, causing accumulations of water under excessive rain. It reduces land preparation cost by ₹ 1000-1500 per ha as compared to traditional method. 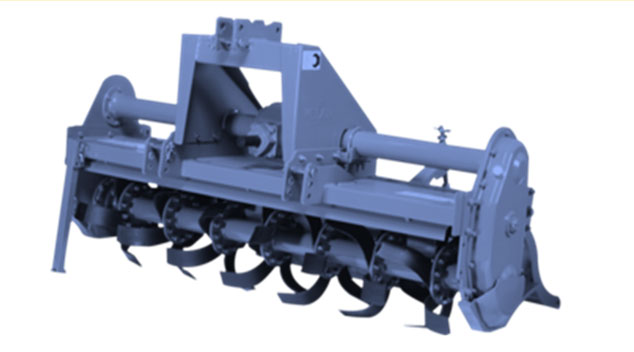 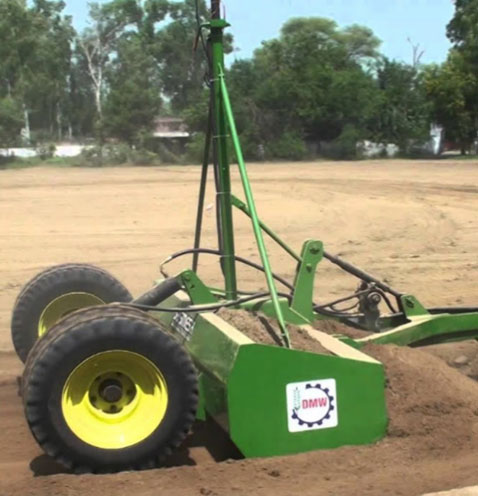 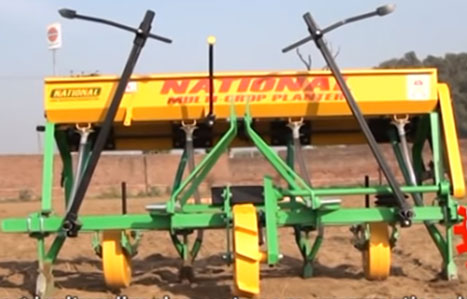 Ridge planter: Maize is very sensitive water logging. Drought also causes substantial yield loss to the crop. Bed planting saves the crop in extreme water conditions like excess or deficit rainfall. During excess rainfall the furrow act as drainage channel while it stores rain water during low rain events. Ridge planters are commercially available which can do bed making & sowing on the tip of the bed in a single operation. Ridge planting ensure better root development, lesser logging, saving of irrigation water and also cut down operational cost. It can cut down 24 and 90 % cost and time, respectively when compared with conventional method. 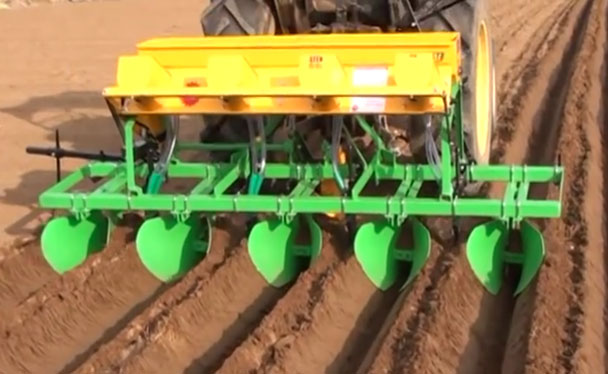 Zero till planter: In conventional agriculture, one ploughing, 2-3 harrowing followed by planking is done for good seedbed preparation and weed control. These 4-5 runs of tractors and tractor attached heavy tools, press the soil particles affecting soil structure, and create compaction problem which hinder seedling emergence, root penetration, soil aeration and water movement. Further, these conventional tillage operation needs excessive fuel, larger turn around period and labor enhancing cost of cultivation. Alternative to conventional tillage is no-till planting, under which planting is done in stubble of previous crop without any soil disturbance/tillage operation. This technology reduces capital investment in land preparation and intercultural operations. It is a viable replacement of conventional and tillage-intensive agriculture. This technology is very common in the U.S.A, Canada, Argentina and Australia. In India zero till maize planting has been adopted in coastal Andhra Pradesh in rice-maize system. This technology saves diesel, tractor’s working time and labor enabling timely sowing of crops. If zero planting is combined with residue mulching, it modifies hydro-thermal properties and protect the crop during adverse conditions. 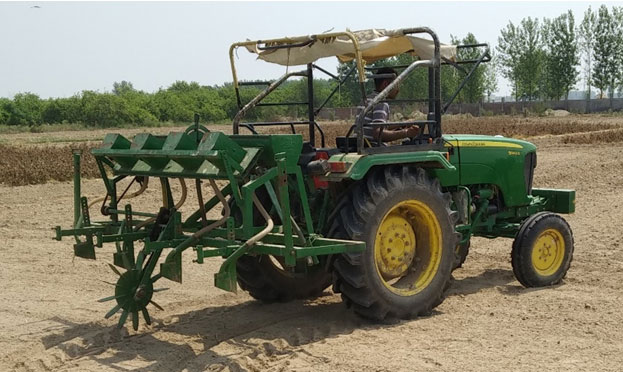 Pneumatic planter: Uniform sowing depth and precise spacing between seed to seed gives uniform germination and also helps in saving of the costly hybrid maize seed using the pneumatic planters in maize. This give uniform crop establishment and crop stand which increase the maize yield up to 10-20%. These can be kept in custom hiring centers for maize planting. 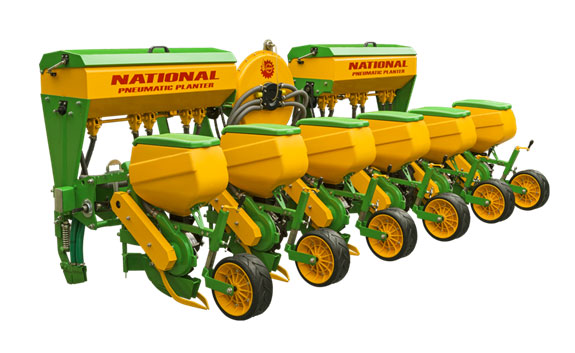 Happy seeder: Happy Seeder consists of a straw management rotor for cutting the previous crop residues and a zero till drill for sowing of next crop. Flail type straight blades are mounted on the straw management rotor which cuts (hits/shear) the standing stubbles/loose straw coming in front of the sowing tine and clean each tine twice in one rotation of rotor for proper.The flails pushes the residues as surface much between the seeded rows. 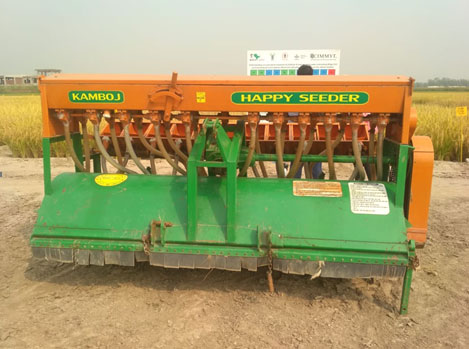 Wide bed planter:
This planter is used for broad bed making and planting of maize simultaneously in single operation. It can prepare two raised bed per pass. Two row of maize is sown on tip of each bed.

FERTILIZER APPLICATION
Tractor mounted fertilizer broadcaster: This equipment is used for uniform broadcasting of granular fertilizer. The broadcaster, mainly consists of a hopper and a spinning disc. The fertilizer from the hopper is made to fall on the spinning disc rotating at high speed, which in turn uniformly spreads the fertilizer. 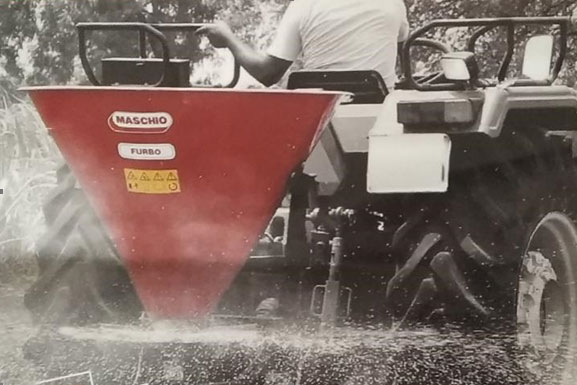 • Placement of fertilizer (60 to 250 kg/ha) along the row (50 to 100 mm away from the plant),
• Earthing up (can cover 10 cm height of stem) and
• Cutting of weeds. This machine can save considerable amount of fertilizer, time and labour over traditional method. The field capacity of machine is 0.56 ha/h. The approximate cost of the machine is 50,000.

WEEDING
Cultivator: Cultivators are popular agricultural implements used for intercultural operations/weeding after adjusting tyne spacing. Mechanical weed control using tractor mounted implements can only be done during the early crop stages because limited tractor and cultivator ground clearance damage the crop foliage at later growth stages. Working depth should be shallow to prevent plant roots damage. Self-propelled power weeder: It is a diesel engine operated weeder with 50 cm operational width. It can cover 1-1.2 ha area per day. The weeder is suitable for inter-culture operations and inter-row weeding of tapioca, cotton, sugarcane, maize, tomato and pulses having row spacing more than 45 cm. Its tines can be adjusted to suit the row to row spacing of the crop and depth of operation. Attachments like sweep blades, ridger, trailer can also be attached with the machine.

Tractor mounted 3-row rotary weeder: With single pass the weeder can clean three consecutive rows (1600 mm width). The rotary type weeder damages the weed root and remove them from the soil. Additionally, this creates dust mulch for conservation of soil moisture and also aerate the soil. It is suitable for the wide row crops (45-90 cm) such as cotton and maize in which the tractor can be run in the rows without disturbing the crop zone. The width of inter-row rotary weeder can be change according to the crop row spacing. To achieve efficient weeding with least crop damage, the crop height should be less than 55 cm. 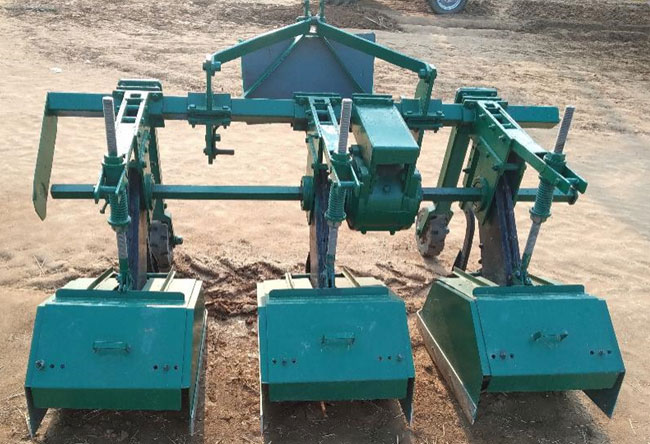 PLANT PROTECTION
Air assisted horizontal sleeve boom sprayer: Boom sprayer can spray larger area with negligible time. It works well in wide space row crops having enough row to row spacing for mobility of tractor. Crop planting needs to be done in rows keeping in view track width of the tractor. The clearance provided in the boom sprayer mounting frame was not sufficient for crop more than 45 cm height so these sprayers are suitable for pre-emergence and early post emergence application of agro-chemicals. It can cover 1.12-1.25 area in an hour. 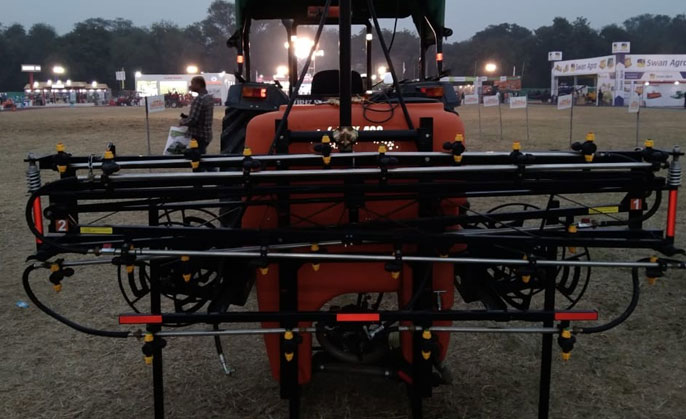 Self-propelled high clearance sprayer: Self-propelled high clearance sprayer is most suitable for spraying on tall stature crops like cotton and maize. It possesses 18 nozzles at 67.5 cm spacing. The track wheel is 1.35 m which means two rows of 67.5 cm comes under the machine and machine wheel track on inter-row zone. Its boom width is 10.80 m and height is adjustable between 31.5 and 168.5 cm according to the crop height. Fenders have been provided in front of the drive wheels to deflect the crop branches away from the wheels for reducing mechanical damage. Its average capacity is1.8 ha/h and cost per spray is Sign of ₹ 485 /h. 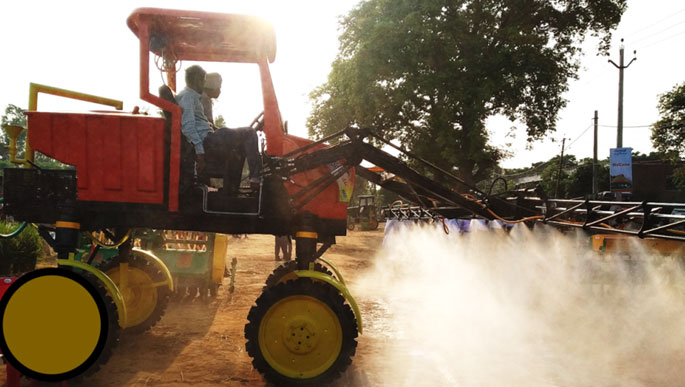 Q-5AC acoustic device for bird management: Nearly ten birds species feed and damage the maize cobs. The yield loss due to bird feeding is huge and ranges between 10 to 40 per cent in the case of maize crop. Hence, automatic electrical sound producing device is designed by AINP on agricultural ornithology. The acoustic device keep away depredatory birds from fields by producing recorded sounds. The device produce natural sound of bird predators and alarm call of pest birds. Thus the pest bird avoid the broadcast area.It is a weather resistant equipment and it need to put one foot above from crop canopy on a pole.Its approximate cost is ₹ 9,000 and one device can protect 4 acres of farm from bird damage.

HARVESTING
Shelf propelled maize combine harvester: It is used for direct harvesting and threshing of maize crop. It has specially designed cutter bar for maize. It has a gathering unit to guide the stalks into the machine and snapping rolls to remove the ears from the stalks. It can be used for harvesting other cereal crops in one operation by changing the header. It can harvest one ha in an hour. 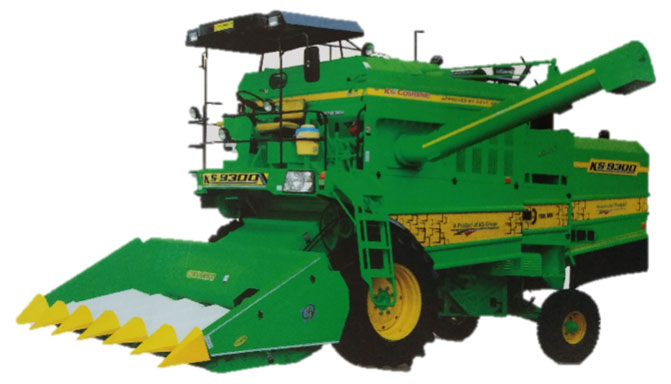 THRESHING
Maize dehusker-sheller: This dual-purpose machine is suitable for simultaneous removal of the cobs sheath along with separation of maize kernels from the cobs. It can save 95% shelling time and 60 % shelling cost as compared to traditional method. 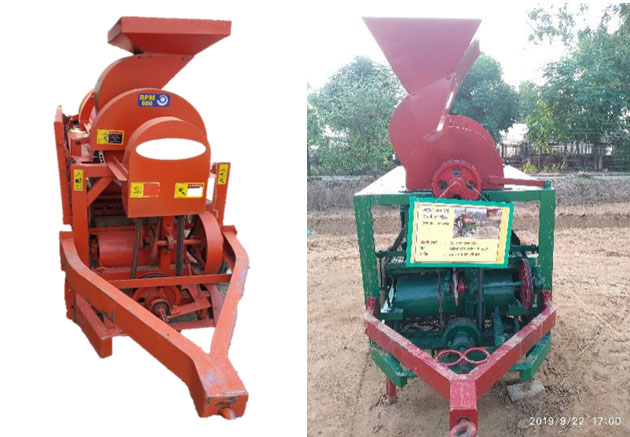 GRAIN DRYING
Mobile Batch dryer: It is PTO or electricity driven, portable and long-lasting dryer. It can dry any type of grain and do not need pre-cleaning of grains. It is free of the risk of blockages or hot spots. It’s drying rate ranges between 2-10 t/h depending on crop type, grain moisture content etc. 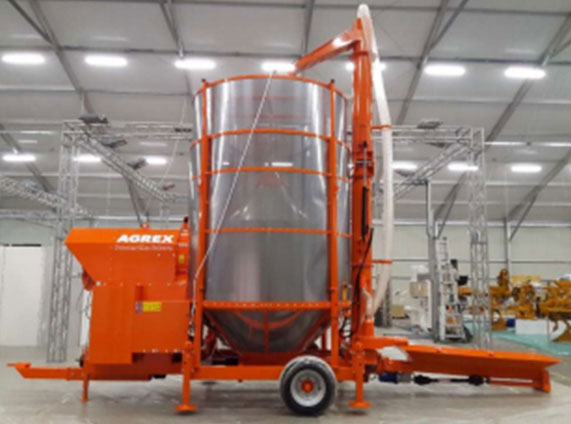