A SUCCESS STORY IN WEST BENGAL OF QUALITY PROTEIN MAIZE

QUALITY PROTEIN MAIZE: A SUCCESS STORY IN WEST BENGAL
QUALITY PROTEIN MAIZE: A SUCCESS STORY IN WEST BENGAL In West Bengal, requirement of maize grain for poultry industry alone is about 2100 tones/day and to satisfy this demand, more than 2.5 lakh hectare is to be brought out under quality protein maize considering average productivity of 30 qtls/ha. Considering the importance of quality protein maize for poultry sector in West Bengal, CIMMYT-India took initiative during 2004-05 to introduce QPM (HQPM-1) in West Bengal in collaboration with State Department of Agriculture, West Bengal and thereafter systematic Research & Developmental work on maize has been started. The QPM hybrid (HQPM-1) was first evaluated in Adaptive trial in all the agro-climatic zones of the state except the Coastal-Saline areas and performance of the hybrid was found to be excellent in every locations and average yield of 70.0 q/ha was recorded. During 2007-08, total area under maize was about 1.0 lakh ha having production of about 30.0 lakh tones. Owing to satisfactory performance and wide adaptability, it was decided to popularize the hybrid across the state through demonstrations. Programme of conducting FLD in different seasons was started since Kharif, 2005 and continued upto Kharif, 2007 the results of which are appended below:

Owing to the cob size, yield potentiality and quality of kernels (both as food and feed) the farmers spontaneously adopted the hybrid for their maize cultivation and seed  material was made available to them. As a matter of fact, the QPM gained immense popularity among the cultivators that resulted in high demand of seed very rapidly. To meet the increasing demand of seed, hybrid seed production programme was taken up in farmers’ field. Some Private Seed Companies and Govt. Undertaking Organizations were also brought under seed production channel. Selected farmers and the personnels of seed growing organizations were trained up on maize hybrid seed production technology with the guidance from Directorate of Maize Research, Indian Council of Agricultural Research, New Delhi. The trained farmers, Govt. Undertaking Organizations and Private Seed Growers took up Seed Production of HQPM-1 under certification programme and produced following quantities of certified seeds. The progress of QPM seed production has been depicted in figure 1. 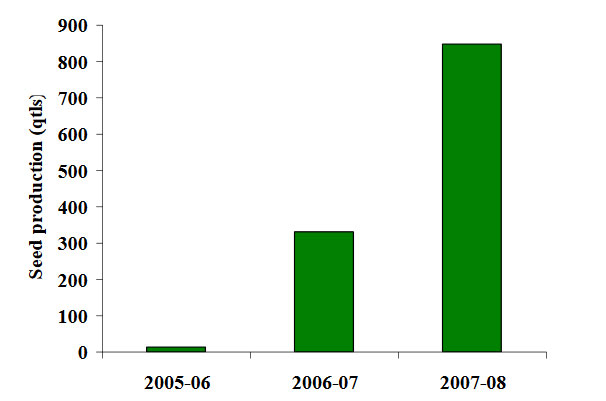 Figure 1. QPM (HQPM-1) seed production in West Bengal Total production of seed was utilized in different Govt. Programmes through distribution to the farmers free of cost for popularization of the hybrid and dissemination of hybrid maize cultivation technology. Further, to bring more and more areas under QPM, a massive programme of seed production of HQPM-1 has been finalized during 2008-09 in which parental seeds will be  multiplied in 25.0 ha areas and that will be utilized for seed production in 400 ha areas in Govt. farms of 17 districts as well as by Govt. Undertaking and Private Seed Growing Organizations.